Skip to content
Originally published on Torontoist on June 26, 2007.

Downtown Toronto experienced a hotel boom during the first half of the 1970s as modern skyscrapers and buildings like the new City Hall changed the face of the core. Among those that made their debut: the Sheraton Centre (1972), the Holiday Inn on Chestnut (1972), the Chelsea (1975), the Harbour Castle (1975) and, opening its doors 32-years ago this week, the Hotel Toronto.

Western International Hotels traced its roots to the early 1930s, when two hoteliers in Washington state joined together to form Western Hotels (the “International” portion was added in 1954 after its first Canadian location opened). United Airlines ran the company from 1970 to 1987, changing the name to Westin in 1980. This ad promises the usual amenities for weary 1970s travelers, such as colour TV and temperature control.

As for dining options, Trader Vic’s first claim to fame was its invention of the mai tai in Oakland, California during World War II. Its restaurants helped popularize tiki drinks and “Polynesian” food, though the vogue for both was sliding downhill by the time the hotel opened. Note the stern-looking chef, who may have seen one pineapple-based dish too many. The chain still exists, though most of its current locations are outside of North America.

In 1987, the hotel swapped corporate banners with the Hilton Harbour Castle and remains in business as the Toronto Hilton. 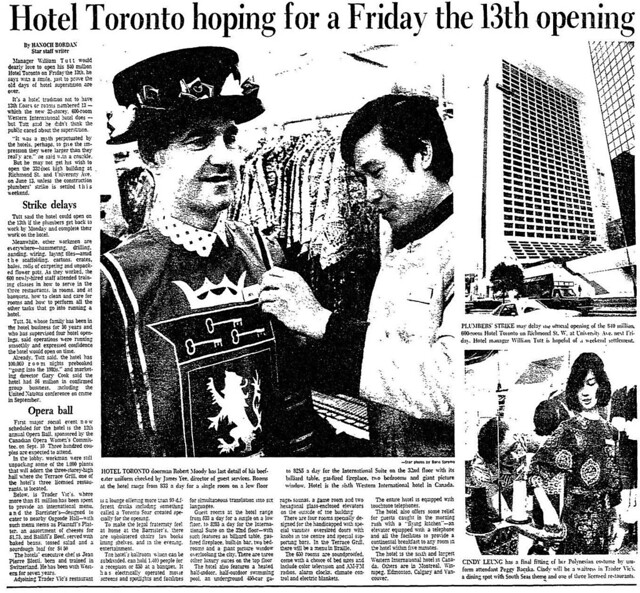 When the Blue Jays began play in 1977, the Hotel Toronto hosted the visiting teams, except for the New York Yankees, who preferred the Westbury on Yonge Street. In a 1979 guide to meeting guys around the city, the Star’s Lynda Hurst provided tips on how ladies could catch a glimpse (or more) of baseball hunks: 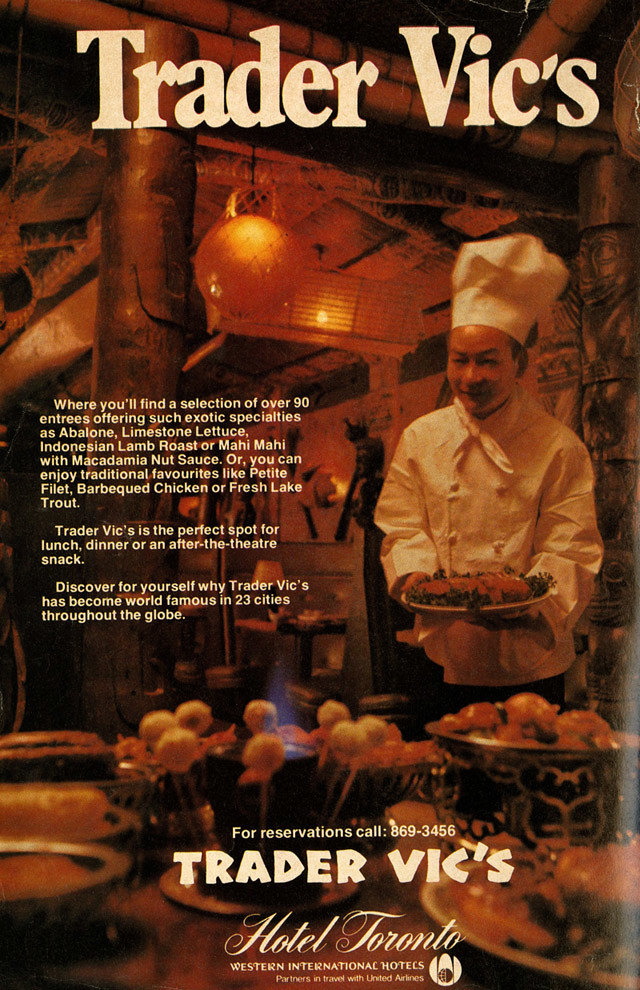 As a tourist draw, Trader Vic’s was included in Mary Walpole’s regular advertorial roundup of Toronto restaurants in the Globe and Mail. For decades, Walpole wore out the dot symbol on the presses, employing a style that seems odd today. You’re tempted to wonder if this was done for aesthetic purposes, or if Walpole actually spoke/wrote like an excited telegram. We’re going to encounter a lot more of her advertorials (as well as writers in other papers, like Brett Halliday of the Sun, who employed a similar style) as we revisit these stories. I was often tempted to write a Historicist column about these writers, who carved out a corner in the dailies for decades but, because they were writing hyperbolic ad copy, may not have received much respect. 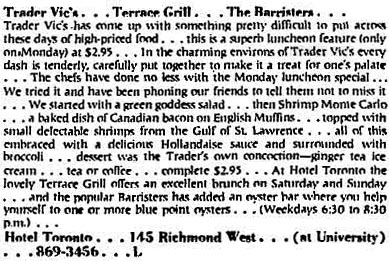 More legitimate reviews viewed Trader Vic’s with mixed feelings. Categorizing it under “Tourist Trade,” a capsule comment in the Globe and Mail in 1978 observed that: 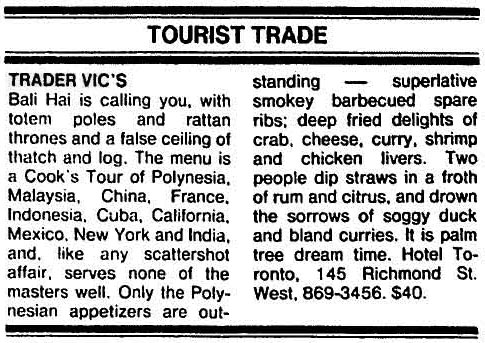 On dreary winter nights, when the scent of sunny islands is the only promise of springtime, this Polynesian hideaway is the ideal refuge. Those whose spirits aren’t raised by bamboo alone can relax in the arms of a giant rattan chair, and let the soft lights and silky Hawaiian music wash over them while sipping the fragrant—and fresh—fruit concoctions for which Trader’s is justifiably famous throughout the world. (A word of warning—the velvet hand of the bartenders with pineapple, mango, coconut and lime gentles liquor to a lethal whisper, but it packs more punch than navy grog.) – Toronto Calendar, in its 3/5 star rating of Trader Vic’s, December 1978.

Trader Vic’s proximity to Simpsons made it easy to participate in promotions such as cooking classes. 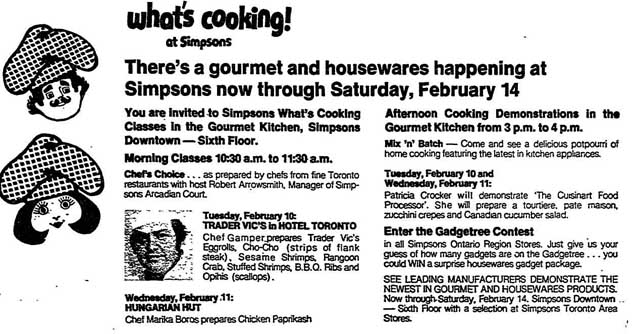 Finally, a drink suggestion if you’re in a giggly mood during a romantic evening. You don’t have to wait for Valentine’s Day! 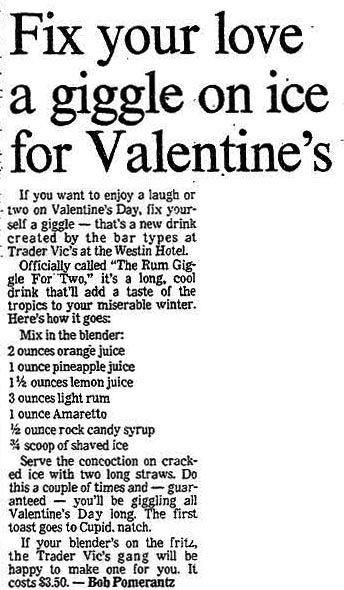 One thought on “Vintage Toronto Ads: Welcome to the Hotel Toronto”