Originally published on Torontoist on April 6, 2007. 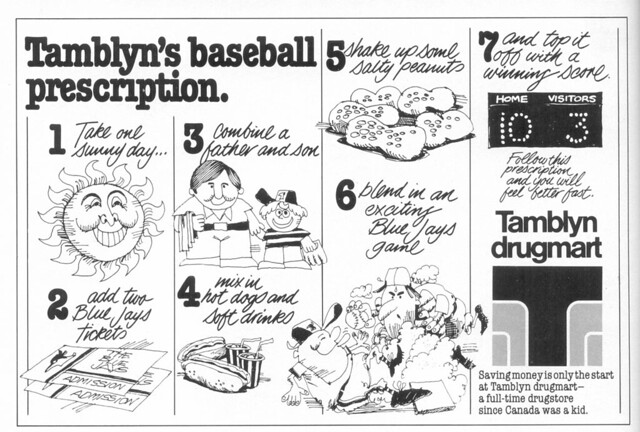 As a public service to fans planning to catch the Blue Jays’ home opener on Monday night, we offer a prescription for enjoying the game from the team’s debut season. Given the current weather, will the 30th anniversary opener be as snowy as the first?

You can debate whether Canada was still a child when Gordon Tamblyn purchased a drug store at Queen St. E. and Lee Ave in 1904. By the early 1930s, the chain had grown to nearly 60 stores, mostly in Toronto, where the companied relied on a fleet of bicycle couriers for deliveries. The company was later purchased by Loblaws, whose hand is evident in the design of the Tamblyn logo.

The company wouldn’t write prescriptions for much longer, as it was sold to British drug store giant Boots within two years of this ad. Several sales and name changes later, the stores evolved into the Rexall Pharma Plus chain. 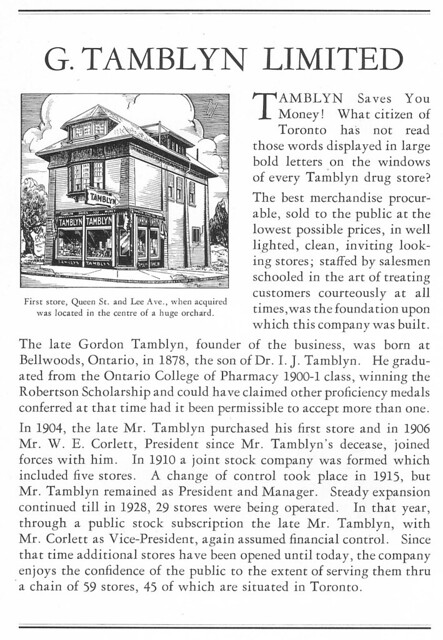 I wrote more about the Tamblyn chain in an article for Historica Canada at the time Loblaws purchased Shoppers Drug Mart in 2013. The ad above provides some more historical context. You can still find traces of Tamblyn’s existence; for example, take a close look at the entrance to Sarah’s restaurant at the corner of Danforth and Monarch Park.

As for the Blue Jays’ 2007 home opener, they crushed the Kansas City Royals in a 9-1 victory in front of 50,125 fans. Pitcher A.J. Burnett earned the win. The Jays finished third in the American League East that season with an 83-79 record.